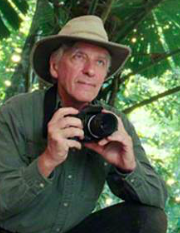 Posted at 13:26h in Special Event by Dinna Davis
Share

Taylor grew up near Seattle in an art-aware environment and took to music at an early age. After high school he entered the University of Washington College of Architecture, but by the time he was 21 he was playing several musical instruments and soon moved to California to start a band.

After spending several years in the San Francisco Bay Area, he moved to Los Angeles. Then after three bands and seven years of heat and smog, he set out looking for a cooler and greener place to live.

In December 1984, in the middle of the rainy season, he moved to Mendocino, California. In his first week there, he “discovered” mushrooms, bought a camera, and started taking photos.

After a year of customizing his equipment and focusing his direction, he presented his first slide show for the Los Angeles Mycological Society annual fair. Since then, he has taken thousands of photos and done hundreds of shows in the U.S. and around the world.

In 1996, Taylor bought a computer and learned quickly how to work with graphics programs in order to “spread the word” about the beauty of this facet of nature. Praise for his work and vision to promote the beauty of mushrooms has gained him acclaim with mycologists, mushroom enthusiasts, photography critics, and nature lovers around the world.

His work has appeared in the National Geographic Magazine, the New York Times, the Washington Post, and many other publications. His photo of a bioluminescent mushroom was the first mushroom photo ever put onto a US postage stamp. Like many other amateur and professional mycologists, Taylor is a pioneer in the discovery and appreciation of mushrooms and other fungi.