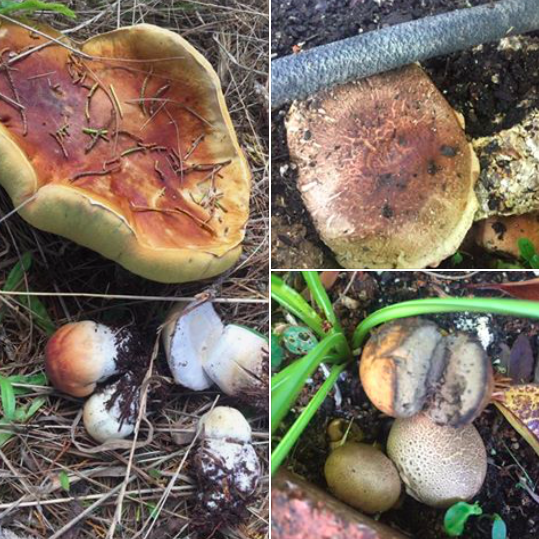 Kevin Sadlier, founder of our Mycological Society of Marin County , went hunting last weekend. He went to the Sierra and spent two days looking in the places that last year produced a bounty of luscious porcini (an Italian speaking person informed us that it is the plural for the Boletus edulis mushroom). Per Kevin, this hunting was frustrating and mainly non-productive. Up and down he went, sideways and backwards and the result was one small porcini button at 8,000 feet. He made that porcini count as a great find when he brought to our Board meeting this baby inside thinly sliced toasted bread, the most savory mayo you can imagine (he must have made it himself) and lettuce and tomato, a real bocatto di cardinale.

This past weekend, hoping to get something for the Continental Mycoblitz 2019, Colleen and I visited the places in Point Reyes were we usually found mushrooms during this month. Everything was dry and crackly, one of the places we usually go was closed, and there was nothing to see. But then….a miracle!, we found a medium-sized porcini and four smallish buttons.

The miracle is not that we found the porcini, the miracle is that they were untouched. As soon as we parked the car, we could see the mushroom shape looming in the distance. We were there approximately one hour and, by my reckoning, about 20 persons walked by the mushrooms. The place was packed with people who walked by and failed to them. Lucky, lucky us.

My garden has also been producing some mushrooms but that is because I water it. The blocks that I got from Far West Fungi are still producing Shiitakes. Also in my flower bed a funny looking, very hard mushroom I have been unable to identify. Can any of you?

In contract, five years ago at Point Reyes, we found Russulas, Marasmius, Amanitas, Rhodocollybias, Hebelomas and Inocybes. How times change!

Kevin, Xander and their son Charlie decided to go hunting in the Sierra for porcini this past Monday. They found four beautiful large specimens between eight and nine thousand feet but that was it. They decided to go swimming instead because the porcini were not abundant. Oh well, maybe next year?

Yesterday and this morning we had fog in Novato. Maybe it will last but the forecast says it won’t. I am anxious for the rains to come, for the mushrooms to bloom, for the weather to turn but in the meantime I am out and about.

Good hunting to all!