Posted at 14:33h in Foragers Report by Dinna Davis
Share

It is so very dry and, with no end to the barometric high around the California coast, we expected to find nothing or next to nothing.  But then, mushrooms have a delightful way of surprising us and this foray turned up more specimens than we have had in a long time.

Since we were more than 20 persons, a part of the group followed Kevin up the mountain.  The others followed me to Mount Vision.

Those with strong knees and lung capacity followed Kevin, who is so fit and has so much stamina that climbing mountains is no chore, and went to the top of Mount Wittenberg.   They found Western Yellow-veiled Amanita (Amanita augusta); a couple in the Amanita gemmatagroup;  delicious Springtime Amanita (Amanita velosa); a lovely Ear Pick Fungus (Auriscalpium vulgare) that dried out beautifully and is now part of our permanent exhibit; an unusual Fairy Finger (Clavaria fragilis); a common Californian coral (Ramaria Formosa); two types of Hygrocybes (coccinea and psittacina); Sulfur Tuft (Hypholoma fasciculare) many Western Amethyst Laccaria (Laccaria amethysteo-occidentalis); plenty of Candy Caps (Lactarius rubidus);  a branch with Oyster mushrooms (Pleurotus pulmonarius); some Russulas; a possible Pluteus; a branch with a Scarlet Cup (Sarcocypha coccinea ); a tiny, tiny bolete (Xerocomellus mendocinensis); and many more I was unable to identify.  Wednesday night, Christian Schwartz was kind enough to help with the identification of some of those we collected for which we are very grateful.    Still, I must declare that all mistakes in identification are mine.  The mushrooms that survived the three days after the foray, plus some found the day of the meeting, were displayed at the Mill Valley Library.

Those who followed me found much less but, nevertheless, we were delighted when we found plenty of the Soapy Tricholoma (Tricholoma saponaceum) that likes to grow in clusters at the top of Mount Vision.  We also found Plums and Custards (Tricholomopsis rutilans) which are supposedly edible but which, as far as I am concerned, are vile.  Addie and Elle, the lovely daughters of Alyssa Brooks-Steiger, found a single Candy Cap, as fragrant as it was lovely.

We met around 12:30 at the picnic area across from the Visitor’s Center in Bear Valley for our pot luck.  Everyone brought delicious treats that we enjoyed thoroughly.  Some were store-bought and really good as you can never go wrong with cheese and crackers and salami and palmiers and brownies and so many other goodies!

Showing off her cooking skills Debora brought a luscious mushroom soup that hit the spot for it was cold and blowing in Bear Valley.  Anna brought a great Rotini and Shiitake Casserole that tasted really good for it had shishito peppers and eggs and was enough for a hungry army. Kevin B. brought an outstanding chicken and shiitake soup that included coconut milk.  He promised he would make for our 2021 Fungus Festival.  Peter brought Mexican Style Carrot pickles that were both colorful and tasty.  Kristi made a delicious Caribbean Black Bean and Almond Casserole that was an instant hit.  Athena delighted us with Persian cucumbers pickled with soy, rice vinegar and sesame oil and which her husband calls “Quickles.” Alexandra brought superb roasted veggies that included over the counter “Umami Seasoning.”   I believe it was Matt’s husband, or maybe Matt himself, who made a goat cheese and mushroom galette that was just beautiful, besides excellent.  Rob brought a barley tabbouleh which, besides being good, was vegan.  Kevin S. brought a melt-in-your-mouth candy cap and almond cake that went in a blink of an eye.

Best of all, we had the chance to talk to persons who love mushrooms, getting out and protecting the woods, and who are gregarious and have interesting careers.

Hope to see you at our next event! 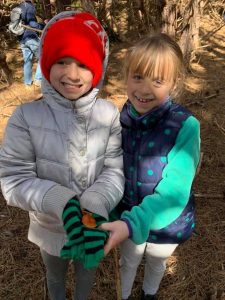 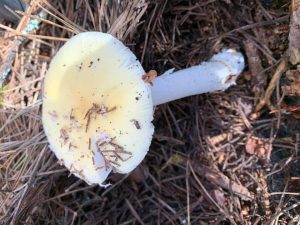 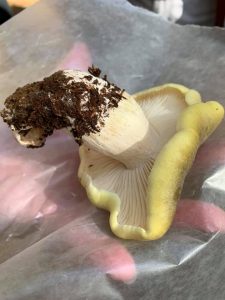 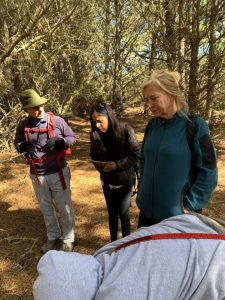 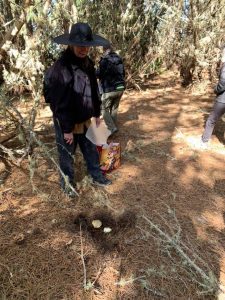 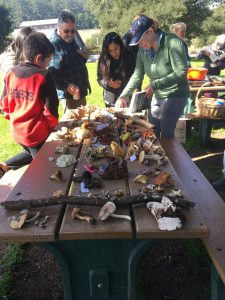